Understanding The Benefits of Renewable Energy

What is the Renewable Portfolio Standard (RPS)?

Are statewide Renewable Portfolio Standards in Michigan constitutional and necessary?

Michigan’s Renewable Portfolio Standard (RPS) is helping the state become one of the nation’s leaders in clean energy. Claims that this policy is unconstitutional were based on a single statement from a court case that carried no legal weight. This case concluded that MISO’s policy for broadly spreading the costs for transmission lines to carry low-cost wind energy to consumers is lawful because it does benefit consumers. Michigan’s RPS and MISO’s transmission cost allocation have together paved the way for the construction of Michigan’s Thumb Loop Line and, in turn, the state is realizing substantial economic benefits.

How serious of a problem is pollution throughout Michigan?

An estimated 275 people in Michigan die each year and another 640 experience serious illness as a result of air pollution that exceeds standards recommended by the American Thoracic Society, according to a new ATS report.

Three regions in Michigan have been cited in the top 25 areas for having the highest mercury content in nearby waters as a result of coal-fired power plants.

Wind power is far less harmful to wildlife than traditional energy sources it displaces – including to birds and their critical habitats. It is one of the only energy sources that does not impact wildlife populations, such as climate change-related habitat loss. Overall, wind causes less than 0.01 percent of bird fatalities – an extremely small fraction caused by human activities – Other causes include buildings (550 million), power lines (130 million), cars (80 million), pesticide poisoning, (67 million), and radio and cell towers (6.8 million) vs. 134,000-230,000 caused by wind turbines. House cats are the leading detriment to birds.

What is shadow flicker?

Shadow flicker pertains to (sun)light that passes through moving wind turbine blades creating a flickering effect.  Shadow flicker is predictable, harmless, and passes quickly. It is based on the sun’s angle, turbine location, and the distance to an observer; it can be avoided by several methods:

How much noise/sound do wind turbines produce?

Typically, two people can carry on a conversation at normal voice levels even while standing directly below a turbine. As the illustration shows, through setbacks (erecting the turbine a distance away) of 400 meters or approximately 1300 feet, the turbine is no louder than a standard household refrigerator. Here is what it sounds like at one of Michigan’s largest wind farms. 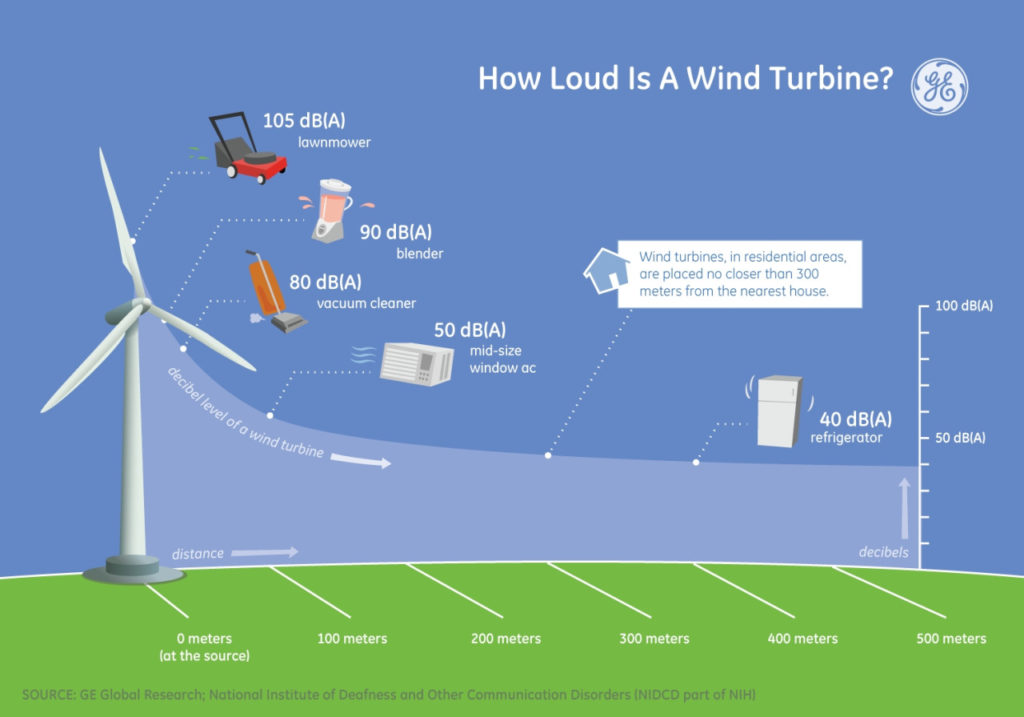 Are wind farms the cause of illnesses?

No. Thousands of people worldwide live near wind farms with no ill effects.  Emitting virtually no air or water pollution, wind energy can positively impact human health.  Studies and government health organizations around the world have displayed wind energy as safe and harmless. For example, a Massachusetts study found no evidence for a set of health effects from exposure to wind turbines or for the existence what some have tried to characterize as “Wind Turbine Syndrome.” A major study in Canada of over a thousand homes confirmed this again, stating, “No evidence was found to support a link between exposure to wind turbine noise and any of the self-reported illnesses.”

Studies have found that a “nocebo” effect can take place, the opposite of the well-known “placebo” effect. The nocebo effect describes a situation in which individuals who are led to expect physical symptoms may actually experience these symptoms, whether or not the supposed cause of the symptoms is actually present. In this case, increased exposure to misinformation about wind actually seems to increase the likelihood that certain individuals will report negative health effects such as headaches or nausea, although no scientific evidence shows wind turbines cause any such health effects.

Is it true that Wind Turbines often catch Fire?

No. A fire at a wind turbine is a rare event, and extensive precautions are taken to prevent this from occurring. Photos on the Internet consist of a handful of incidents over decades of operation of hundreds of thousands of turbines around the world. Even such sophisticated equipment, subject to constant motion and sometimes challenging environments, can sometimes fail. Safety measures to prevent fires include systems that change the pitch of blades to prevent too much speed, temperature monitors and automatic shut-off systems that prevent overheating.  With modern turbine technologies, sensors and routine maintenance result in very few such failures.

What kind of Economic Benefits does renewable energy offer?

Wind has driven over $140 billion of private investment into the U.S. economy over the last decade creating well-paying jobs for over 100,000 Americans. Wind turbine technician is our country’s fastest growing job, projected to increase by 108 percent over the next decade.  Also, the U.S. wind industry employs America’s veterans at a rate 50 percent above the national average.  Many displaced Michigan auto workers have found new careers in wind energy.

The solar industry is one of the fastest-growing industries in the nation, and offers tremendous opportunities for workers from all backgrounds. There are 233 solar companies at work throughout the value chain in Michigan, including 81 manufacturers and 4,134 local jobs. Several large retailers in Michigan have gone solar including Ford, General Motors and IKEA.

Yes. Technological advances have enables renewables to better maximize their power output, helping drive down costs.  Wind’s cost has declined by 66% over the last seven years, and the price of solar energy has fallen by 43% over the last five years making renewable cost-competitive with all other forms of electric generation, including shale gas at today’s unsustainably low prices, and factoring in the incentives that all forms of energy receive.

Renewable energy is uniquely able to offer fixed-price contracts because it has no fuel cost and therefore no fuel price risk. Utilities and consumers like wind and solar because they act as a hedge against future volatility of natural gas prices, much like a fixed-rate mortgage protects homeowners against interest fluctuations.

No. Many studies have shown that wind power increases the value of homes with turbines on the property. And importantly, it does not negatively affect nearby neighbors’ property values. Wind projects benefit all local property owners by driving economic investment and tax revenue. These funds improve roads, schools and community services, while also keeping local taxes low — all  which factor into property values. Here’s a major study on wind farms and property values that analyzed more than 50,000 home sales near 67 wind projects across nine U.S. states.

How does wind energy help our farmers?

Wind energy has become a new drought-resistant cash crop that is helping sustain America’s family farmers and ranchers.  Wind projects pay millions of dollars a year in lease payments and local taxes while leaving 98-99% of surrounding lands available for its original uses such as farming, ranching, wildlife habitat, and recreation.

Yes. Wind and solar energy helps create a more reliable, and well-balanced energy portfolio.  A large power plant can shut down abruptly at any time, forcing grid operators to keep large quantities of fast-acting, expensive reserves ready 24/7. Because changes in wind and solar output occur gradually over many hours and can be predicted, while failures at conventional power plants occur instantly and without warning, more reserves and more expensive reserves are required to reliably integrate conventional power plants. We need reliable power at all times, so what happens when the wind doesn’t blow and the sun doesn’t shine?

Watch this video to find out.